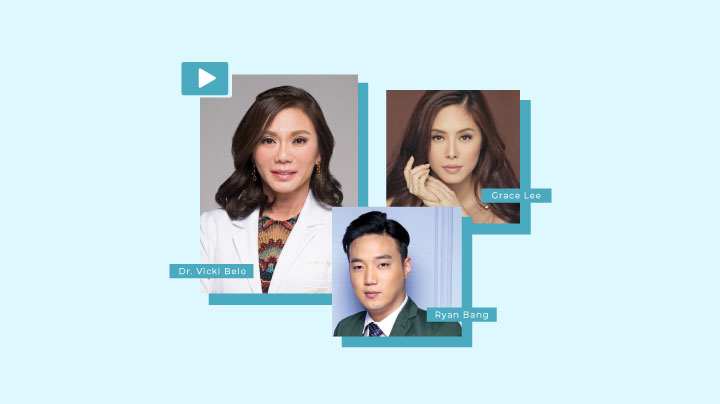 After a weeklong hiatus, Dr. Belo was finally back for her usual FB Live sessions! Yesterday’s combo featured radio DJ and entrepreneur Grace Lee, as well as our much-awaited #MysteryOppa who turned out to be none other than Showtime co-host and comedian, Ryan Bang!

They had a nearly two-hour conversation that centered around everything K-related: Korean beauty, culture, TV and movies, and so much more. If you missed that (or you’d prefer to get just the highlights), see below!

1. Ryan’s skin improved so much from Belo treatments that he no longer wears makeup…and found a girlfriend!

2. Dr. Hayden lived his oppa dreams for a hot minute when he modeled in South Korea back in college.

MILK TEA ALERT: There’s a new premium milk tea in town called @firetigerph and it’s extraordinary. Lines are long so if you want one, line up now.

“I did!” he responded when chided by Dr. Belo. “When I was in college papuntang med school. I worked as a model. So every vacation time during med school and MedTech, I would go to Korea to model. Sumideline ako ng konti,” Doc Hayden shared.

3. Grace Lee explained why the Korean Wave is making such a big impact in the Philippines.

“Alam ko, I think this is a long time brewing, meaning it didn’t happen overnight,” Lee began. “15 years ago pa lang, pinapanood na natin ang Korean dramas, but they were far and in between. Not like now: there’s so much Korean content that’s being consumed by the international market. First is the production value. There’s a lot of money spent on making sure that everything is polished. Second, of course, is the storyline. The packaging is there, then add on to there all these beautiful actresses and actors.” Grace then talks about the success of the K-drama series Crash Landing on You, citing its strong storyline and beautiful cast. “I think K-wave is going to continue and become stronger in the years to come.”

Grace also delves on the rigorous training system that aspiring idols and actors go through to become famous in Korea. “If you look at Korean stars, when they come out, they’re well-packaged. It’s all there: beauty, talent, head-to-toe ‘yan…there’s always a system in place to train them into a finished product when you see them on TV. That’s why when you see them, they’re already so good na.”

4. Ryan and Grace explain the culture of beauty in Korea and how it differs from the Philippines.

Seoul has the highest rate of cosmetic surgeries in the world, with almost a million procedures done yearly. It’s been dubbed as the plastic surgery capital of the world, so they’re no stranger to enhancing their natural beauty. “Even if nagpagawa ka, as long as the product is beautiful, they don’t mind,” Grace explains.

5. You can achieve that highly-coveted Korean glass skin without leaving your house.

Super duper late post from an event I had the other day. Just wanted to thank my Great Taste Family for welcoming me.✨Thanks to my glam team too @robbiepinera @hairbybrentsales @perrytabora

As we know, it was Korea that created the “glass skin” trend, causing women all over the world to strive for naturally dewy, hydrated skin. If you’re game to head to one of our clinics, our ultra-hydrating Glass Skin Facial is the best place to start. It’s a serum infusion facial treatment that will leave your skin supple and hydrated. But if you’re far from a clinic right now, you can always get the Belo-It-Yourself Hydrating Facial Kit from the Belo Shop!

It starts off with an exfoliating cleanser to strip away impurities, then oil control pads to regulate oil production and prep the skin for the next step: a hyaluronic acid mask. “Oiliness is next to ugliness, right? But we want water. Pag nakita niyo yung mga bata, ang ganda ng skin nila. Hindi sila oily. Marami silang water sa mukha. So yung hyaluronic acid, may mask na from Paris that soaks your face in hyaluronic acid. This then absorbs 1000x its weight in water, so sobrang hydrated yung face.”

Dr. Belo also played a couple of games with Ryan and Grace while viewers played along at home. She was shown before-and-after pictures of Korean celebs and made to guess which procedures they may have had done. We also showed the audience censored photos of popular oppas, and the first viewer to guess the name correctly would win prizes from us! That’s why you should never miss a Belo Live.

Once again, stay tuned on our social media channels for announcements of our next live sessions, and head to our YouTube channel to binge-watch Lives we’ve held before. See you at the next one!

ICYMI: A Timeline of Iza Calzado’s COVID-19 Journey, As Told to Dr. Belo