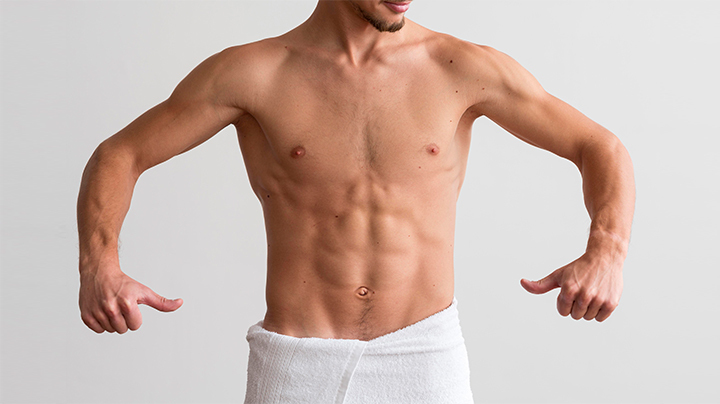 But that doesn’t mean you can’t have the washboard abs you want to get. It just means there will be less “packs” in yours.

According to Healthline, each person is “born with a set number of these connective tissue bands” or the  rectus abdominis muscle, which “give the appearance of multiple packs stacked on top of each other on either side of your abdomen.” Your genes determine the “symmetry, length, and size” of these bands. While most people are born with three bands (making it possible to have a six-pack with the right amount of workout), some people have four bands (for eight-packs) or just two bands (for four-packs).

“But just because you have more or less doesn’t mean you’re stronger or weaker. It’s just your genes,” explains writer and health professional Corey Whelan. “Of course, what you eat and how you exercise also play large roles in how your abs ultimately look.”

Gender also plays a role in achieving well-defined abs (no matter how many packs you have). In the same Healthline article, Whelan pointed out that “men have around 61 percent more muscle mass than women due to their higher testosterone levels” and “women require more body fat than men” in order to produce estrogen, maintain fertility, and to optimize energy levels. She writes, “Men require less body fat for optimum health, too. So, they can more readily lose enough fat to show their toned rectus abdominis muscles underneath.”

In an article for Men’s Health Magazine, Los Angeles-based writer and strength coach Trevor Thieme also pointed out that if you already have defined abdominal muscles, genetics will also determine whether they’re symmetrical or not.

“Odds are your unevenness is genetic, and there’s not a whole lot you can do about it… If those sections aren’t Photoshop-perfect, you aren’t alone. Uneven abs are common even among physique athletes,” Thieme explained.

He also mentions other causes of uneven abs, like medical conditions. “Uneven abs can also be caused by certain medical conditions, such as scoliosis, which results in a sideways curvature of the spine. Athletes that predominantly use one side of their body (e.g., tennis players, golfers, pitchers) occasionally develop a bit of lopsidedness as well.”

Aside from getting the picture-perfect physique, genetics also plays a big role in weight loss in general.

Award-winning journalist Patrick Strudwick wrote about a test called XRPredict for UK news site The Independent. The test was developed by systems biology professor Dr. Jamie Timmons of Loughborough University to determine “the genes responsible for your body’s adaptations to aerobic exercise”.  Dr. Timmons did a study in the UK and concluded that “approximately one in six of the general population are “high responders” when it comes to exercise, which means the participants responded well to the health regimen and increased their fitness level by about 25-50 per cent. Meanwhile, one in three are considered “medium responders” (15-25% increase in aerobic fitness), one in three are “medium-low responders” (5-15% increase), and another one in six are “low responders”, which will only see an average of 5% increase in their fitness level despite following a strict health program.

“So far, the only explanation we have for this is that somewhere in their system, between the mouth inhaling air and the oxygen, probably in the periphery of the muscles, they’re maladapting to exercise so that it becomes harder for them to get oxygen to the muscles,” Dr. Timmons tells Strudwick.

This means that your genes will also determine how well your body responds to exercise and diet. This also means that losing weight or having a toned physique may take longer for some people.

So what does all this science talk mean? It simply means to be kinder to your body and yourself. You first need to understand that each body is unique and it may respond differently to working out or diets and sometimes you need to give yourself more time to work on getting fitter. It also means that comparing your progress with others’ will not make you lose weight or gain muscle definition any faster. You need to work on the pace that’s meant for your own journey and enjoy every victory along the way whether it’s big or small.

Strudwick, after his own fitness journey, shared an important bit of wisdom when it comes to finding a healthier version of yourself. He ends his article: “The key, [Dr. Timmons] says, to all this, is not only to discover your genetic capacity and tailor your workout as best you can but, crucially, to follow the simplest and perhaps the most effective exercise advice of all: do something you enjoy.”

Get Whipped Into Shape by Following These 4 Fitness Instructors