8 Girls Talk About How They First Met Their Partners

By Chandra Pepino For Belo Medical Group on February 11, 2021 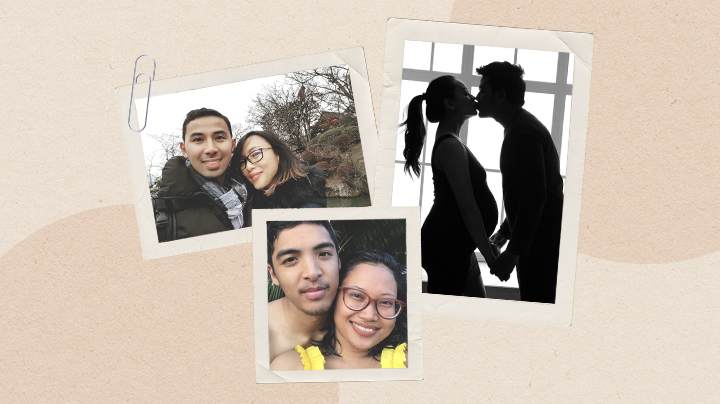 If you’ve seen the cult classic Christmas rom-com The Holiday, then you’re familiar with the concept of a “meet cute,” aka a perfectly-engineered, destined-by-the-universe scenario between two budding lovers. It’s the beginning of kilig, and for some lucky people, it’s happened in real life. Below, and just in time for Valentine’s Day, here are eight IRL stories to make you swoon.

“I met my husband in 2009 at a bar in Ortigas. My best friend from Australia came home, and we were catching up over drinks. Since a lot of us were single, we asked one of our guy friends if he could invite some of his friends over.

“An hour later, three guys came, and then there was this cute chinito surfer wearing a trucker cap, a shirt, board shorts, and slippers who came in and, like in the movies, the world stopped and everything went slow-mo. That’s when I knew he was the one!

“I had to leave early, and he followed me to the car to ask for my number and then he realized he didn’t have his phone. I gave it anyway, and he told me not to worry ‘cause he saved it in his head. Three days later, he asked me out and the rest is history. We’re now married and have a cute little daughter who is about to learn how to surf soon.”

“We met through mutual friends in the summer of 2018 while going out for drinks. He had just come back from the States. They all came from Cebu City and wanted to spend the weekend drinking in Dumaguete. I had a partner at that time so we stayed friends, especially on Instagram. Fast forward to late January 2019, when my previous partner and I eventually broke up. I was sad and had no friends to talk to, but Enzo was one of the few. We found that we had a lot in common and shared the same sentiments about a lot of things, so we kept talking. I eventually got the chance to visit Cebu City in May 2019 and met Enzo again, and we hit it off by going on dates the entire weekend! We’ve been together for almost 2 years, and we’ll be celebrating our 2nd anniversary in June.”

“I met my husband at the same office we worked in, years after I swore to myself that I’d never date anyone from the same office (because I used to date someone in our cheer team, so same concept LOL). We were both publishers for Summit’s men’s titles, but we hardly worked together since we handled different titles. I was single then, he was in a relationship.

“Over the years we became good friends, office best friends even, since we often went together as a group to clients when selling our titles (men’s titles more or less have common advertisers) and talked about anything under the sun. I never expected us to happen at all, until small sparks flew as our friendship progressed. The stars aligned because when those sparks came he was single na, and I was that friend who was always there to support him. Boom, we just happened! Right there and then I knew na he was ‘The One’, because I always felt that I’d end up with someone who was a good friend (and this was proven right after sooo many failed set-up dates in the 5 years I was single). 2+ years into the relationship, he finally proposed, and got married a month after we celebrated our 3rd anniversary as boyfriend and girlfriend. We’re 2 years married as of writing, thankfully still happy & in love.”

“We were set up by our common friend, circa 2015. We started chatting sa Facebook, then n’ung comfortable na kami, we decided to meet up. Our first date was in Rustics because he was working in the Greenhills area that time (with our friend as my chaperone, LOL). Rustics turned out to be our default date place. Fast forward to 2017—our friend was promoted to Best Man, and the theme of our wedding was rustic, too!”

Six years ago… the second we first met was when I attended a weekend retreat for church. These big wooden doors opened, and I was greeted by a group of people who screamed excitedly in welcome. Immediately the only face I saw was this guy. I could absolutely swear I knew him.

“I spent that first evening trying to put a name to him. The whole weekend, I kept sneaking glances. I felt like a stalker LOL, but also I couldn’t shake this feeling that my heart already knew him! The universe had it that when we had our weekly church meetings and Christmas play, we never crossed paths. I felt like he had been avoiding me. Finally one day, about a month after first seeing him, I got him to talk to me. The next week, he asked me on a date. In 12 days, we were in a relationship and have been happily together since.”

“We met in Spain two years ago (matched on Tinder actually, haha!) in the most unlikely of circumstances. He moved to Spain a year prior and had just gotten out of a 3-year relationship. I, on the other hand, had just dropped out of law school and decided to switch career paths and work in Spain for a year to rediscover myself. You could say we were both going through pivotal times in our lives. Maybe there is some merit in the saying, “you find love when you stop looking.

“I’m not a big believer in destiny or whatever you call it, but our story does make me wonder. I mean, what are the odds of two strangers who grew up in the same small town (Cebu) finding each other in the same small town (Marbella, Spain) many years later—and discovering we had similar social circles too! The fact that we were so compatible from the start—in personality, values, interests, humor, and even love languages—was amazing to us. Whether or not soulmates really do exist, I think we found them in each other.

“Currently, we’re LDR and have been for the past year. COVID sucks. But despite the distance, being together feels easy. We devote time and energy every day for video calls and make each other feel loved, appreciated, supported, and heard. We’re also very honest with each other. We say exactly how we feel and what we want and fix issues right away. Overall, we’re very happy. LDR is super challenging, I’m not gonna lie, but the right person really makes everything worth it.”

“The jock meets the goth. He hated her. She didn’t like jocks. Field trip. A bus accident. Stuck on the side of a mountain for 5 hours. She said, “Pare, tigil mo na ‘yang yosi mo.” He wasn’t able to smoke one stick of the five cigarette packs he brought.

“13 years later, married with one furbaby.”

20 Absolutely Free Gifts for Your Loved Ones This Christmas

10 Makeup-Free Celebs (and the Belo Treatments They Love!)