ALL of Scarlet Snow Belo’s Halloween Costumes Over the Years 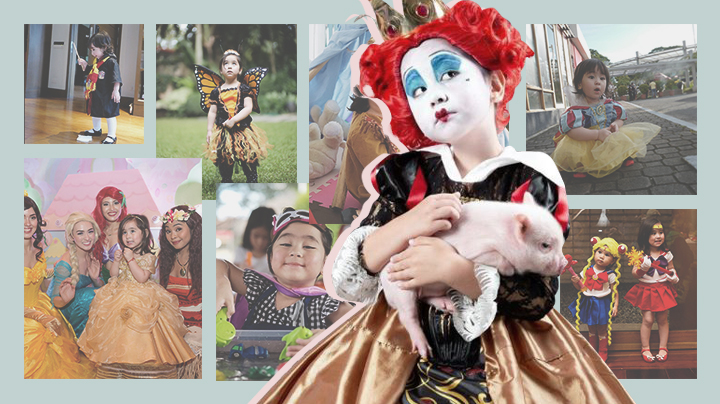 Halloween may have been a little different this year—no trick-or-treating, no big parties—but even stay-at-home orders can’t stop anyone from putting on a costume and still feeling the Halloween spirit. Scarlet Snow Belo, in particular, is always dressed up for the occasion! Here’s a collection of ALL her Halloween looks over the years:

1. Her first-ever Halloween costume: a ready-to-cook lobster at 6 months old!

@scarletsnowbelos 1st costume ever at 6 months . Lobster ready to be cooked. .

Yaya Anita in her matching chef’s outfit has us LOLing!

2. Now that she can walk—an angel at one year old!

It’s that time of the year again where @scarletsnowbelo has many costume changes for Halloween season . At age 1 , she dressed up as an angel , Snow White , Pocahontas , and Hermione . Which one is your favorite ?

3. Here, she’s an adorable Snow White sitting on the pavement.

5. We can totally imagine a grown-up Scarlet correcting a fellow wizard on their pronunciation of “Wingardium Leviosa.”

6. Scarlet’s 2 now, so it’s time to channel a great woman of history—Audrey Hepburn!

Trick or Treat ! Remember this year ? This young lady definitely had so many treats . At 2 years old , @scarletsnowbelo dressed up as Princess Ariel , Princess Belle , Sailormoon , and Audrey Hepburn — strong women she looks up to 🥰

7. This Ariel looks like something stressful’s on her mind!

And here she is surrounded by grownup princesses!

9. Scarlet makes a great Sailor Mars, together with her cousin Lacey as Sailor Moon!

10. Scarlet’s finally 3! Here she is with mom Dr. Vicki, dressed in matching butterfly costumes in the garden.

Here’s another trip down memory lane . @scarletsnowbelo continues to bloom as she dressed up as a beautiful butterfly , and Frozen’s Princess Anna with her amazing transforming costume at 3 years old . Didn’t she grow up so fast in only a year ? 🥰

11. She’s once again with her cousin Lacey, dressed as Frozen’s Anna and Elsa. ADORBS.

12. Here’s Scarlet enjoying herself at a children’s party in a masked costume.

I challenge you! Who’s your Pokemon?😍 My partner Pikachu @scarletsnowbelo and I will only accept the Poke Battle as long as its not Grass, Ground, Electric & Dragon Type. Better if Water Type hehe 😅 Game? Happy Halloween!💛 📷:@ashlili, 👗: @carian.cruz Styling by yours truly #cosplay #pokemon

This is the cutest May and Pikachu pairing we’ve ever seen, NGL.

I couldn’t stop watching this! So cute! 🥺 @scarletsnowbelo as Pikachu! 💕 . . PS: I’m in LA right now for Blizzcon and will have a special FB stream here playing #Overwatch2! I’ll be giving in-stream rewards to random watchers just by watching/staying on the stream thanks to @facebookgaming! @ashlili will be with me! Be sure to tune in for some free Loot Boxes! 💕 LA Time Nov2 7pm-9pm / PH Time Nov3 10am-12nn

14. *All* the stops were pulled so Scarlet could be the ICONIC Frida Kahlo.

I heaven you, peoples. See you in your dreams.🖤

15. This year, at five years old, Scarlet teamed up with her parents for a truly memorable portrayal of the Red Queen, the Mad Hatter, and Knave of Hearts.

16. And finally, she paired up with Mommy to be Wonder Women, together!

10 Things Dr. Belo Did While Under Quarantine