Belo Medical Group/Blog/Messed Up? Here’s How to Apologize, the Right Way

Messed Up? Here’s How to Apologize, the Right Way 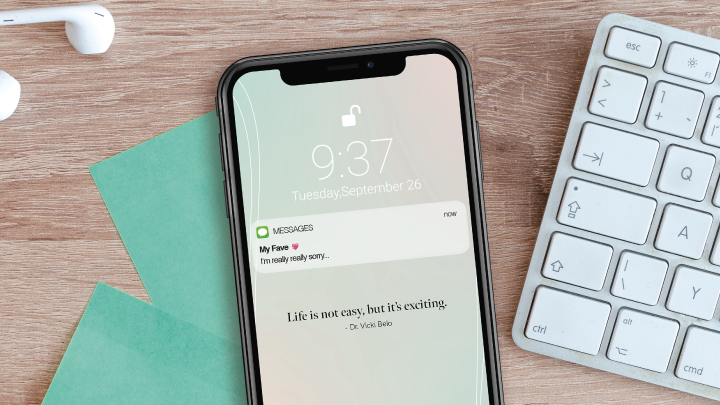 Nobody’s perfect. We’re all bound to offend someone one way or another for something we said or do…or didn’t say or didn’t do. Whatever the reason may be, the next and best course of action as a decent human being is to apologize for how we messed up. If you’re one of those people who want to make things right but don’t know where to start, here are some practical pointers to apologize the right way.

According to The Etiquette School of America, “the secret ingredient to sincerely offering or accepting an apology is intention.” Ask yourself why you want to apologize. Is it because you genuinely want to ask for their forgiveness or you just want to feel better after what you did? It’s important to know your intentions so your apology will be more sincere.

Once you believe you’re ready to genuinely apologize, some behavioral experts say it’s best to ask the person you’ve offended for permission if you can apologize. Most of the time, they’ll say yes, but in case they’re not ready to hear you out, respect their decision and give them some space.

If the person says he/she is ready to listen to your apology, begin by acknowledging that you made a mistake.

“The reason for this step is that an offer of ‘Sorry!’ without communicating that you’ve understood why the words or actions were hurtful results in less of an impact to the hearer,” says Dr. Elizabeth Minei in an article from Psychology Today. During this part, it’s important to remember that choosing the right words can make or break an apology. When you admit your mistake, avoid saying things like “if you feel bad about it” or “mistakes were made.”  As the Etiquette School of America points out, “‘If’ and words like it put the blame on the other person for feeling hurt instead of on the person who committed the offense.

The best way to go about this part is to determine if the other person is receptive. If they ask for an explanation, go ahead. If they don’t, it’s best to keep the details to a minimum so as not to make then relive what happened. But always remember that an explanation is different from justifying your actions. According to New York City-based therapist Kimberly Hershenson, “a sincere and humble apology doesn’t attempt to justify wrongdoing. Instead, it ‘shows that you recognize your hurtful actions, accept responsibility, and are willing to change’.” The people behind the Greater Good In Action program at UC Berkeley in California say “it’s better to say, ‘There’s no excuse for my behavior’ than to offer a shallow defense.”

Next, tell the other person how you plan to make things right, which usually entails a change in your behavior.

In the same article from Psychology Today, Dr. Jesse Matthews said, “Most of us can agree that an apology is meaningless if nothing changes afterward. This is why it is so important to follow up with how you plan to change your behavior to avoid this problem in the future.” The article adds that “you must follow through with the change. It is the only way that the other person will know that you are truly sorry.”

Lastly, formally ask for their forgiveness.

Literally ask the person if they can forgive you. If the person says yes, then great! You can move on with your lives with a deeper understanding of your relationship and make sure to keep your promise to change for the better. If the other person doesn’t forgive you, don’t be discouraged and don’t take it against them. Dr. Minei suggests saying something like this: “I understand that you want nothing to do with me, and I regret that my mistake has led us to this place. I do not want to end our friendship and can only say that if you change your mind, I would be willing to continue our relationship.”

Experts say a personal apology done face to face is always the way to go, but if that’s not possible due to safety restrictions, go for the next best thing: a video call. While a written apology is also good, a video call shows that you’re willing to make (not just find) the time for that person and it will also be easier for you to see their reaction to know if your approach is the right way to go.

In the end, always remember that apologizing and forgiveness are not about who wins or loses in an argument. An apology should mean that you value your relationship with another person more than you value your pride.

The Top 10 Sins You Do To Your Skin, According to Dr. Vicki Belo’s Podcast