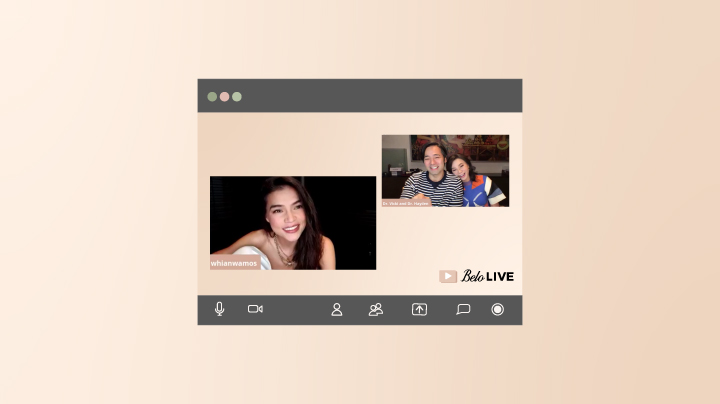 Heartbreak—we’ve all been there. The sober realization that a relationship is beyond repair has hit all of us like a truck, and we all cope in different ways. Rhian Ramos not only had to deal with the pain of a broken heart, but also the speculation and prejudice of many. Last Tuesday, Rhian chatted with Dr. Vicki Belo and Dr. Hayden Kho about all this and more. Here’s what you missed:

1. Rhian dispelled rumors that she was anorexic.

Last September 27, it was revealed that Rhian had broken up with her then-boyfriend, Israeli businessman Amit Borsok. She went on a weeklong social media detox, and returned to nasty rumors about the changes in her body. “As expected, people started commenting on my appearance. They noticed a big weight loss. I guess I also looked a little tired, because…I wasn’t really sleeping well at the time.” She decided that, to be an example to her followers, she needed to admit the truth instead of shy away from it. “Nothing in my life felt the same anymore…I was forgetting to eat, and I was trying to sleep, but I couldn’t…I’m trying to call it my off-season.” She posted a video on her YouTube channel in response to the assumptions, and she’s since taken control of the narrative.

Dr. Belo also cleared the air: “I want to get this out of the way. She is not anorexic. An anorexic person thinks she’s fat and cannot see herself the way she is. Just on that alone, Rhian did realize that she was thin, too thin—and she knew why she was thin, because her heart’s broken.” The doctors actually sent

2. Before Dr. Belo and Doc Hayden were married, Dr. Belo’s breakup coping mechanism was to go to her clinic for treatments.

Happy anniversary my love . The last 3 years have been some of the happiest years of my life . You have been the best and most patient husband to me , best father to scarlet and best partner in leading the BELO Medical family . When God promised that He would give us more than we could ask for or imagine if we followed His ways He really meant it . I am constantly amazed by how you are , how you think , how you lead and most importantly how you love. I thank God for blessing me with you and Scarlet and humbly ask that He continue to be with us as we travel life’s journey together .

Human beings cope with heartbreak in seemingly universal ways. Most of us like to change up our look, just to properly bookend the relationship and signal a new era of singlehood. The same was true for the two doctors during their turbulent times long ago. “I noticed with Vicki, every time we [broke] up—we’re kind of experts in breakups already—from what I noticed with Vicki, when I see her again, she looks different!” Doc Hayden said in jest. “Either nagpagupit, nagpalagay ng filler, nagpa-Thermage…” he trails off. “Buti na lang ako ang may-ari ng Belo Medical Group!” Dr. Belo replied jokingly.

We also heard about how Doc Hayden tried to win her back during those times. “I really had a hard time with Hayden, because he loves me so much when we’re broken up. So when we’re broken up, my gosh, akala mo mamamatay na siya pag wala ako,” Dr. Belo shared with a laugh. (Premium tea!) “May flowers everyday? Nasa labas ng bahay ko from 10 in the evening until 5 in the morning, naghihintay na baka pagbigyan ko?!” It’s a good thing they’re now happily married!

3. Despite everything, Rhian was happy to have dealt with the breakup in a more introspective light, thanks to the quarantine season.

“It’s interesting to go through it in a very quiet, internal way. Also, the people that God has put in my life [have] really given me a lot of guidance and comfort…this is the first time that I just kind of decided to switch my focus away from the idea of losing things. I have so much to be grateful for and be happy about. Whereas before, I would probably just distract myself.”

Happy Father’s Day @dochayden . You are truly a perfect father . So present , so loving , so patient and kind. I thank God for you everyday . You make our lives so rich and enjoyable . May God bless you and keep you safe . We love and need you so much .

“There’s really a difference when you’re married and when you’re not married. The reason why you’re dating is you want to see if…this is a person that you would want to willfully love forever. Love is a matter of the heart as it is of the will. And if you will to love a person, you can. So there’s this “love,” a feeling, and there’s this “will,” a verb. Love of the will. So when you fall in love with somebody, you form a bond of love, and that bond is built because of good times together. But when it’s time to break up, then you break up.” Doc Hayden then stresses the importance of giving yourself time to be weaned from that now-broken love bond, so that someday when you’re ready again, you are healthy enough to form a new bond with someone else.

“But it’s different when you’re married. Before, if you’re not yet married, ‘pag ayaw ka ipaglaban ng tao, then OK, you walk out. But if you’re married, you’re now in a commitment. And a commitment means you honor your word. You’re there—you use your will to stay there. This time, you have to fight for it, even if sometimes, you don’t feel like loving the person. You have to still love the person.”

5. Rhian came to Belo for that post-breakup glowup.

Me, when you’re holding a champorado

There’s no better way to bounce back than to give yourself a pamper day and a makeover, and Rhian did just that. “I did Skin Genius on my face, just because whenever people lose weight…parang it didn’t feel like my skin was stuck to my face anymore. I don’t know if that’s a weird way to explain it. But, yeah. Now it feels good.”

She also came back to do the treatment on her tummy. “When I saw your tummy, parang the skin was so loose also. Parang she’s right about the skin not fitting anymore. Parang her body, her frame had become so small that there was a lot of—I would pull her face and be able to pull it this far,” Dr. Belo gestured. Weeks later, Rhian’s enjoying her new tightened skin, and she’s on her way to feeling like herself again. Go, Rhi!