This Iconic “Emily in Paris” Scene is Where Dr. Vicki Belo and Dr. Hayden Kho Got Married 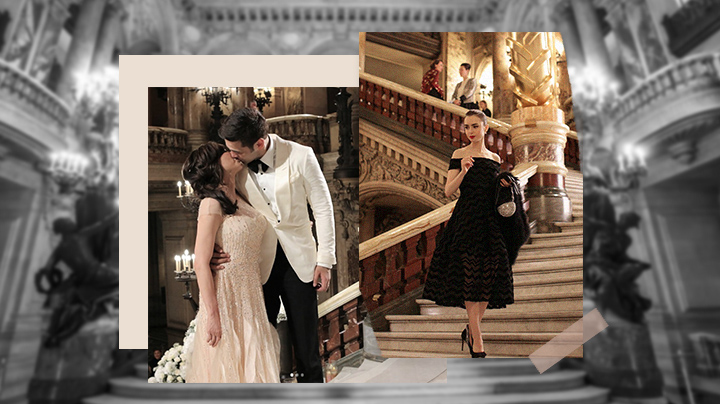 At the 22:40-minute mark of Emily in Paris’ sixth episode, we see Emily Cooper (Lily Collins) walking towards a massive, imposing opera house. Inside, along the beautiful Grand Staircase, she meets—and (SPOILERS AHEAD–skip to the next paragraph if you haven’t seen episode 6!) promptly abandons—her date, Professor Thomas (Julien Floreancig), with whom she was supposed to attend the Swan Lake ballet. We don’t blame her for leaving him—he was a pretentious wet blanket, after all!

But if you’re wondering why that setting looked familiar, it’s because you’ve probably seen it before. The Palais Garnier is where Dr. Vicki Belo and Dr. Hayden Kho got married last September 2, 2017!

The iconic opera house, also known as the Opéra Garnier, was chosen by the doctors because Paris is “their favorite city.” To be clear, the pair had their actual wedding ceremony in the American Church in Paris, but according to Doc Hayden, the idea of hosting their reception at the opera house came from Dr. Belo’s sister and eventual maid of honor, Karen Cancio-Litre. “Vicki thought, ‘Teka, if we’re going to do a wedding in Paris in a hotel, in another ballroom, why not do it in Manila na lang? It looks the same.’ So we had to find a new venue. Her sister suggested, about a thousand times, to do it in Palais Garnier.” And so, the celebration that would soon be known as the “fairytale wedding of the year” became a reality.

At last , the December issue of Philippine Tatler @philtatler is out . I’m so excited because they featured exclusive photos and never-before-seen footages of our wedding . Thank you , Tatler ! And thank you , @michael5inco for making me look like a princess♥️ #aKHOandmyBELOved #Tatler #ParisWedding #MichaelCinco @wedluxe

250 guests attended their wedding, flying in from the Philippines and all over the world. “I just felt it was a beautiful wedding. People in the Philippines concentrated on the venue and the grandness of it all, but for us, it was because we finally got married in front of the Lord. We could feel all the love from everyone. It was magical,” Dr. Belo mused.

The couple’s first dance happened on the very same staircase where Emily met up with Professor Thomas, and from there, guests were brought to the Grand Foyer for dinner. “From this day on, may there be no more Team Vicki and Team Hayden. Help us to stay united in love. Pray for us. Guide us, ‘cause we need your love. And lastly—and this is the most important—if you found any encouragement from what you witnessed today in your union, Vicki and I would like you to know that it’s really because of Jesus,” said Doc Hayden in his wedding speech. It’s no secret that the couple have faced the highest of highs and the lowest of lows in the past, but their wedding was the amazing celebration of a new era: one filled with love and forgiveness, and centered in their unwavering Christian faith.

Thanks, Emily in Paris, for reminding us of one of the greatest real-life love stories of our time!

How to Pose With Your SO, According to Dr. Vicki Belo and Dr. Hayden Kho