By Chandra Pepino For Belo Medical Group on December 16, 2020 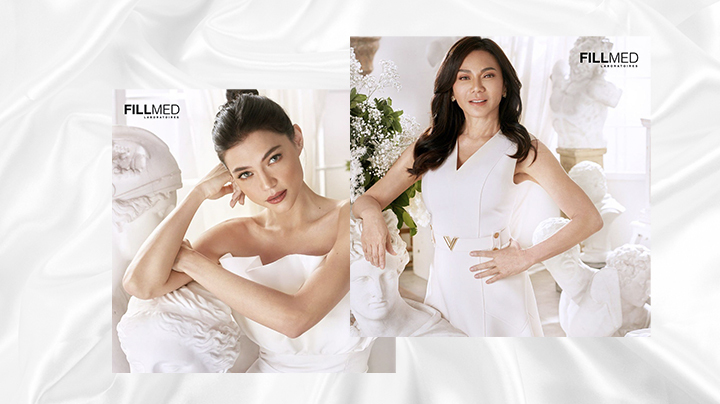 Last November 30, FILLMED® Philippines held a virtual launch attended by influencers, fellow beauty experts in the media, and dear friends. Drs. Vicki Belo and Hayden Kho, Jr. discovered the French aesthetics brand last year, and now, they’ve brought it to the country so that Filipino doctors can give their patients the global standard when it comes to aging gracefully. Along with this virtual launch, FILLMED®’s first five Philippine ambassadors were officially unveiled—Rhian Ramos, Dr. Vicki Belo, Patricia Santos, Ria Prieto, and Katrina Razon. Here’s what they had to say about ageism in the showbiz industry.

“Of course, as I’m getting older, I love it, because I’m really caring about [my skin] more,” she began, recalling her early days as an aesthetic MD, during a time when the Philippines hadn’t even heard of glycolic acid, let alone tumescent liposuction. “When I started, I was only in my—I think I was only 31. So I didn’t care about aging, really. I thought it was so far away, for much older people, and it didn’t bother me at all. My problem, even then, was acne.” Dr. Belo has always been candid about her struggle with acne, from her early teens into her 30s. “But now as I’m getting older, and I notice that even the skin on my body is aging, I love it because I’m aging along with my patients. Or I’m going ahead of them, so I’m finding cures for all sorts of aging problems.” Dr. Belo sees aging not as a weakness, but as a great advantage when it comes to giving her patients the best. That’s because she makes it a point to try things herself before making them available to everyone else. If she can put her personal stamp on a new machine or product, then it will surely work for her patients.

She’s more than just a scion—Kat has a heart for development in all ways, whether it’s personal in the form of her yoga practice, motivational in the form of empowering young Filipino entrepreneurs, and enriching in the fields of music, sustainability, and education. And as a young, formidable, female force in two male-dominated fields—DJing and entrepreneurship—she’s observed the stark difference between how men and women are perceived. “I think it’s a bigger problem that women face, especially in music, in the arts, where it’s youth that’s fetishized in the end. And I think once we let go of that fetishization, then we move towards a more inclusive society for the world,” she asserted.

“Someone who has been on this planet for more years has more experience, more wisdom. And once we rethink and reshape our models of thinking like that, then we start to think about the job markets, value people who are older than us, because they are very, very valuable in terms of experience and knowledge.”

After a highly publicized breakup this year, Rhian was scrutinized by the public for many reasons—all this during the wake of her 30th birthday, which she celebrated in isolation. This unique and challenging period allowed her to ruminate on the three decades she’s lived through, and how she truly feels about growing older in the public eye. “I celebrated my 30th birthday just this month, and the sound of the voices of my friends greeting me, I heard pity in it. ‘Heeeey, how are you? Happy birthday! You okay?’” she laughingly recalled. “It might be a little bit to do with there’s a quarantine right now and they don’t want me to spend my birthday alone…but I think they were all surprised to hear me at my perkiest on my birthday, because I don’t think they understood how excited I was to be 30. And I really am happy about being 30.”

As an actress, she’s also noticed that women are somehow punished as they advance in age, from career opportunities to potential romantic interests. “I think ageism is really a lot more harsh towards women. I feel like older men are still considered a catch, when older women are just treated with a little less value, I guess, as if your value is connected to how young you are,” she observed.

However, she’s developed a (for lack of a better word) DGAF attitude towards her detractors, crediting her maturity and her hard-earned wisdom. “I think every decade, you care a little less. And how is that a bad thing, honestly, if your opinion is the most important to you, how is that a bad thing? So I’m excited to be 30. I’m excited to be in my 40s. I think every day, we can improve ourselves as people, and every decade, I’m excited to meet the best version of myself, better than I was ever before. So I don’t mind ageing.”

As the editor-in-chief of Lifestyle Inquirer and founder of the eponymous website Ria Recommends, Ria has seen firsthand the beauty standards women are made to ascribe to. One look at Ria, however, and you’d never guess she’s 43 years old. The compliments she receives on her youthful looks, she observes, can be a double-edged sword. “It’s funny when people say, ‘Oh, you look so good, and you’re this age.’ It’s almost assuming that at a certain age, you have to look a certain way, which isn’t necessarily positive,” she explains.

However, her reverence for older women is in no way patronizing; she believes they hold a deep well of wisdom that only age and experience can truly bring. “I find—in a weird way, I find older women not more beautiful, but I am more attracted to them, because I know they’ve gone through things. They have wisdom to share.”

As a mother to three sons, her perspective on chasing your beauty goals is realistic and sustainable; after all, you have to teach your kids to strive for improvement, not perfection. “I honestly believe that beauty is superficial. But at the same time, we owe it to ourselves to take care of ourselves. [I’m] a mother. If I don’t feel good about myself, how can I impart that to my kids? So a lot of it is about self. As you grow older, personally for me, I know that I’ll never be perfect. What I’m striving for is to age gracefully, to accept what I have, and know the limitations of what I personally can do for myself. So it’s really more about acceptance, and I think, not for anything, that people I admire, they’ve accepted themselves fully. And I think that’s attractive.”

Ever since the prodigious young designer captured widespread attention for dressing Kim Chiu at the 2014 Star Magic Ball, Patricia Santos has been swept into a whirlwind career dressing brides and celebrities of discerning taste. During her younger years, she would often catch herself comparing herself to her peers. “I think every woman, that’s our number one concern, is that oftentimes, we feel insecure about ourselves. We tend to compare ourselves with others. But what I realized is that each and every one of us is unique in our own way,” she said in earnest. “It’s very cliché, but once I got older, and once I was able to really focus on myself and my goals, I just—you know—I just really stopped focusing on other people, but instead, focused on myself. And not focus on what other people do, but instead, what I can do to become better.”

Though they may come from different walks of life, all five ambassadors have their own breadth of experience to offer to the world. They’re living proof that your age shouldn’t stop you from living out your dreams—and your best life.

3 Common Types of Hair Damage—And How to Treat Them

3 Beauty Secrets on How to Age Gracefully